Read my essay on sovereignty

I want my essay to allow people to give themselves permission to really critically analyse the important concepts which are crucial to our future as Aboriginal and Torres Strait Islander people.

Below is part one of an edited transcript in an interview with YACVic about my residency to help you learn more about my essay.

Why did you apply for the YACVic Young Thinker in Residence?

It was an opportunity to do something really different to my studies. I study Software Engineering and so most projects I'm involved in is around building software. I’m also  involved in the entrepreneurial space as well.

So the Young Thinker in Residence was just something totally different in the youth space for me, and also my first time exploring policy. I was really interested in expanding my horizons and exposed to something new.

And because it was sponsored by Koorie Youth Council in particular, I thought that would be a great way for me to start getting outside of my usual circles because most of my connections in the Aboriginal and Torres Strait Islander community in Victoria is heavily concentrated around The University of Melbourne. I was so thrilled to be surrounded by such a supportive environment in YACVic and KYC.

What kind of support did YACVic and KYC provide?

For YACVic, I think just even the fact that YACVic has sorted out the program to have funding. You are advocating to set a standard around youth work, youth participation, and recognising and paying young people for their perspectives, time, and intellectual property.

That is an important precedent to be setting. And having people like Sam Champion (YACVic’s Participation and Development Co-ordinator) who was extremely supportive, patient and understanding the whole way through both good and hard times.

KYC was able to support me heavily around building the right connections. KYC has a really good reputation in Victoria, so their support gave my project and me legitimacy to be able to have conversations with certain Aboriginal leaders that were important to making my final “product” possible.

How would you describe the final “product” of your Young Thinker in Residence?

I decided to publish one essay (out of many) that I wrote during my time as Young Thinker that I think will challenge and elevate the thinking of other young Aboriginal people the most.

The question at the core of this essay is “what does sovereignty mean to us as young people?”. It seemed like the most straightforward way to convey my thinking was with an essay and I wrote some other essays which won't be published on this particular platform.

But I think like having that space and support to explore some other things is really incredibly unique, important and rare for young people, especially Aboriginal and Torres Strait Islander young people. 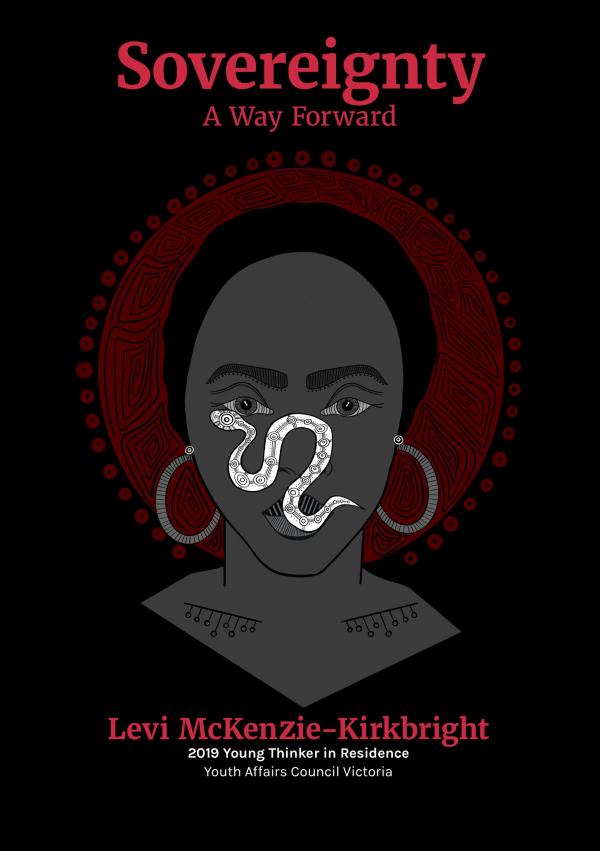 The front cover features an original artwork by Cheyenne Rain Travis which touches on themes of Aboriginal progress and Afrofuturism and was inspired by Levi's essay.

The question at the core of this essay is “what does sovereignty mean to us as young people?”

What do you hope for people to get out of reading your essay?

Right now we live in a time with social media and a 24 hour news cycle where we are constantly confronted with an avalanche of information and all the political heat around things like Invasion Day or what happened with Miss Tanya Day. So instead, I want my essay to allow people to really give themselves permission and time to really critically analyse the important concepts which are crucial to our future as Aboriginal and Torres Strait Islander people.

What does treaty look like? What is the power of sovereignty? These are powerful words which have come up in the last 10 years, whereas when I was growing up in the 90s and the early 2000s it was all about reconciliation.

As Aboriginal people, treaty and sovereignty are becoming recognized and alongside ongoing discussions around the Aboriginal and Torres Strait Islander Voice to Parliament, now is the time in a quickly changing political landscape to prompt people to pause and think a bit more deeply about these things.

It's very easy to wave flags and to shout stuff. And sometimes it's incredibly hard to sit still and think through these ideas.

What change would you like to see Aboriginal and Torres Strait Islander young people?

Fundamentally there needs to be treaty. It’s been two hundred and fifty years almost without one, and I think issues around sovereignty, Aboriginal intellectual property, and land ownership could be fundamentally solved by treaty.

I'd be blessed if I were alive for that to happen which, by the looks of it with recent progress in Victoria, I might be. That would be pretty incredible. I dream of that day.

What kind of other opportunities did the Young Thinker in Residence help you pursue?

I ran a workshop with young Aboriginal people from Melbourne, and I facilitated a yarning circle and was on a panel at the Koorie Youth Summit.

And I'd never really done any facilitation before. Actually since then, because I enjoyed it so much, I actually ended up joining an organisation as a facilitator for The Man Cave, which explores mental health for boys and young men.

I also read many reports and policy documents on Aboriginal Affairs and spoke with Aboriginal leaders, who really helped shape my thinking and ideas for the future. I'm really keen on writing to continue advancing ideas of progress for Aboriginal and Torres Strait Islander people.

I don’t think any of this would have been possible if it wasn’t for the residency.

Levi was the 2019 YACVic Young Thinker in Residence sponsored by Koorie Youth Council. You can read his powerful essay on Sovereignty here.

Levi is a proud young Aboriginal man with ancestry from Gadigal, Yuin, Worimi, Biripi, and Gamilaraay, and he belongs to the La Perouse Aboriginal community in Botany Bay, Sydney.