Wednesday 15 November was a historic day, as we learned the results of a national survey which asked Australians "Should the law be changed to allow same-sex couples to marry?" The result was a decisive victory for the LGBTIQ+ community.

But what do the results of the marriage equality survey mean for young people and the services that support them?

Most Victorian electorates returned a “Yes” response. In some electorates, like Higgins, Melbourne, Melbourne Ports and Goldstein, well over 80% of survey participants voted “Yes”. In electorates with a high “Yes” vote, rates of participation in the survey tended to be high. For young people hoping for the option of marrying a same-sex partner one day, it must have been a deeply affirming and positive experience to see their local communities voicing support for this.

The marriage equality survey also showed what can happen when first-time voters are engaged with an issue they feel passionately about. During June-August, in the lead-up to the survey, Victoria’s electoral roll grew by over 16,000 young people aged 18-24, an increase in enrolments for this cohort of nearly 4%. Young Victorians aged 18 and 19 were refreshingly keen to vote on this issue, with 84.8% of young women and 79.3% of young men in this age group returning their surveys.

Their rate of engagement was on par with older people aged 50 and over. This contradicts predictions made by some commentators that young people would be too “apathetic” to vote, or couldn’t figure out how to use the postal service! 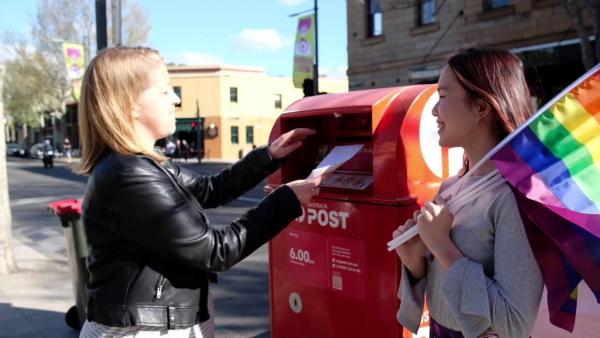 However, looking at the results by electorate, there are big contrasts between different neighbourhoods.

In the electorates of Calwell and Bruce, over half of respondents ticked “No” and “No” votes came in at over 45% in Holt, Gorton, Mallee and Scullin. These electorates cross suburbs and centres including Broadmeadows, Caroline Springs, Craigieburn, Cranbourne, Glen Waverley, Horsham, Lalor, Melton, Mildura, Mill Park, Stawell, Swan Hill, Truganina, and Wheelers Hill.

For LGBTIQ+ young people in “No” electorates, it must have been deeply distressing to realise that large numbers of your own neighbours and potentially even family members must have voted against your equality and happiness. For example, the mental health service ReachOut reported a 40% surge in young people seeking help in the three months since the marriage survey was announced.

A lesson here for youth services is to direct energy to supporting the wellbeing, safety and social and political participation of same-sex attracted young people and sex-and gender-diverse young people who are growing up in “No” electorates. Check out our list of amazing organisations working to support young people who need someone to talk to.

Meanwhile, the survey should also prompt us to think about how we support young people’s engagement. While those aged 18 and 19 voted eagerly, the turnout dropped slightly for young adults aged 20-24. 80.1% of young women in this cohort returned their surveys, as did 73.5% of young men.

However, the findings of the marriage equality survey also remind us that disengagement from politics and social issues more broadly is not just a “youth” problem. In fact, the voting patterns of young adults aged 20-24 were not substantially different to those of adults aged 25-45.

We need more engaging and relevant education for young people, including those who are no longer at school, in spaces including higher education and training institutes, youth and community services, social media, workplaces, sporting clubs and arts and entertainment spaces.

New work is needed to strengthen the involvement of all Australians under 50. And when we plan new initiatives to boost electoral participation, we should be talking to 18 and 19 year-olds. They have spoken, so it’s time to hear and to value their ideas as part of solutions which will move our country forward.