Growing up in Werribee as a member of the Wyndham City Youth Council Committee, 18 year-old Aatif Syed is used to taking the lead on issues important to young people.

Aatif joined YACVic as a young member in mid 2017 after applying for our Young Thinker in Residence program. Although he narrowly missed out on a spot, he was quick to put his hand up for the next youth participation opportunity that came his way: joining the selection panel as part of the Melbourne Metro railway station naming process. “I thought, ‘this is a once-in-a-lifetime opportunity. Let’s go for it’. So I gave it a shot,” he said.

How does a YACVic Young Member end up naming train stations?

Youth participation is at the heart of everything we do at YACVic. So, when the Melbourne Metro Rail Authority (MMRA) contacted YACVic’s Board of Governance to discuss how young people could contribute to its naming project, we knew it would be a great opportunity for our young members.

MMRA had just announced a public competition for Victorians to submit name suggestions for the five new underground train stations being developed in Melbourne CBD as part of the $11 billion Metro Rail project. The administrative office was assembling an advisory panel to assess the suggestions and submit a shortlist of names for the government to consider.

Aatif is a strong voice for young people and so he sprung to mind immediately. Our Participation and Development Coordinator Sam Champion reached out to him to set the wheels in motion, with YACVic Board member and rural representative Bev Hoffmann volunteering her full support throughout the process.

Sorting through thousands of names

Firstly, Bev and Aatif attended a briefing about the Metro Rail project and the role the new service will play in improving city access. “It’s a huge scale project and it can be pretty confusing so it was good to hear all about what the development is trying to achieve,” Aatif said.

Once the competition had closed, Bev and Aatif had their work cut out for them. “The call-out received 50,000 names, so it was a lot of spreadsheets," he said. “We received full lists plus the rationales behind them all, and it was our job to filter.”

They were tasked with distilling the exhaustive list down to their top five names for each station so they could present their ideas at the next committee roundtable, a job which Aatif says he found more difficult than he thought he would. “I was into names that were more about the geographical location, whereas Bev was really interested in women being represented,” he said. “Other panel members were from places like Aboriginal Victoria and Museums Victoria, so everyone was coming at it from really different angles.”

The four-month process saw Aatif spend around 20 hours on the project altogether. He is quick to add it was time well spent.

"It was so cool. I got to attend meetings in a huge fancy government building, I met so many new people in high positions, and I learned a lot about forum-style settings; how to share your voice and listen in respectful ways."

And so for the big question: What is Aatif’s verdict on the name outcomes?

When the final names were announced in late November, Aatif says he had mixed feelings. “I voted for Parkville and State Library, and I like Anzac, but I’m not sure that I am keen on the North Melbourne/West Melbourne decision. I don’t know about Town Hall either, but I think overall I am happy.”

It was reported that alternative Aussie icons such as Vegemite, Bunnings Sausage and Shane Warne were hot contenders. Aatif was just as fond of the more quirky names.

Of course I voted for "Station McStationface – I am 18 after all, let’s be real." 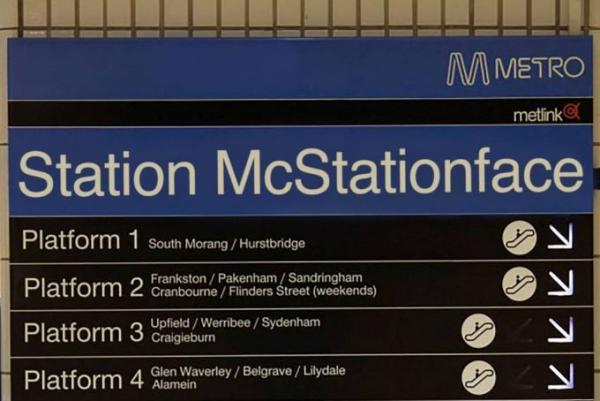 Youth participation: the next stop

While the final say on names was ultimately left up to the government, it is important for young people to be given opportunities to influence high-level decision-making at as many stages as possible. For Aatif, access was a big benefit. “I got a lot out of the experience. I made so many connections and got access to a more professional world – you just don’t get opportunities like that,” he said.

At YACVic, we’re all about changing that. We want young people to have opportunities like Aatif did all the time, so they can make valuable contributions and feel empowered as active participants in our communities. We are thrilled we could support Aatif to make his mark on Melbourne history, and we are even more thrilled to learn just how much he got out of it.

One way young people can access opportunities like these is by becoming a YACVic Member. For less than the price of a coffee, young people aged 12–25 can join a passionate community of youth advocates and learn about loads of ways they can get involved in key decision-making. Here’s a taste of the benefits.

If you’re interested in involving young people in your work or have any questions about our youth participation model, please get in touch with our Participation and Development Coordinator Sam Champion on pdc@yacvic.org.au or (03) 92673702.