Keep In Touch (KIT) Van is a youth mental health promotion and wellbeing initiative co-designed and co-led by young people alongside local government and state government which will travel across the state.

Funded $460,000 over two years by the Victorian Government through the Department of Health and Human Services, Regional Development Victoria, the Loddon Campaspe Regional Partnership and the six local government councils, YACVic played a crucial role in making this important new service a reality through the When Life Sucks initiative. 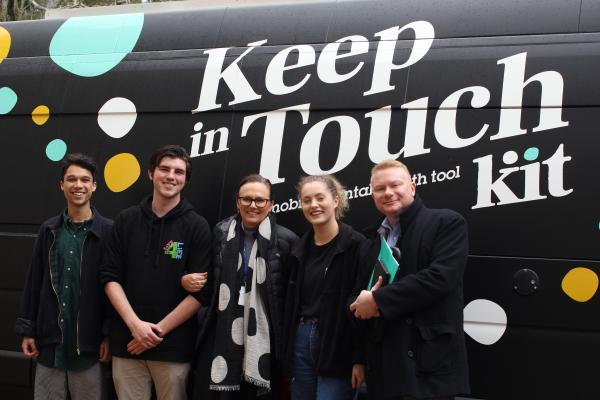 Co-designers Seb, Kyle and Bridie celebrate with Hayley (Regional Development Victoria) and Nathan (Department of Health and Human Services) from the Victorian Government

When Life Sucks was a series of forums to understand the ideas and needs of hundreds of young people across 6 regional shires, stretching from Gisborne to Echuca, in tackling mental health.

The final report found that “Regional and rural young people often state that stigma, distance and cost of services, a general lack of support services, and a lack of community awareness about mental health and wellbeing all contribute to the increasing difficulties in getting support when they need it.”

Young people expressed common themes during these consultations; no matter where they were located in the region, access to mental health facilities was severely limited by little-to-no public transport. Additionally, mental health facilities available were not particularly welcoming or friendly to young people. School counsellors, in the schools that had them, were under-resourced and only had limited availability. Some young people pointed out that when services were made available in other towns, people were reluctant to rely on them due to solidarity with their own communities. 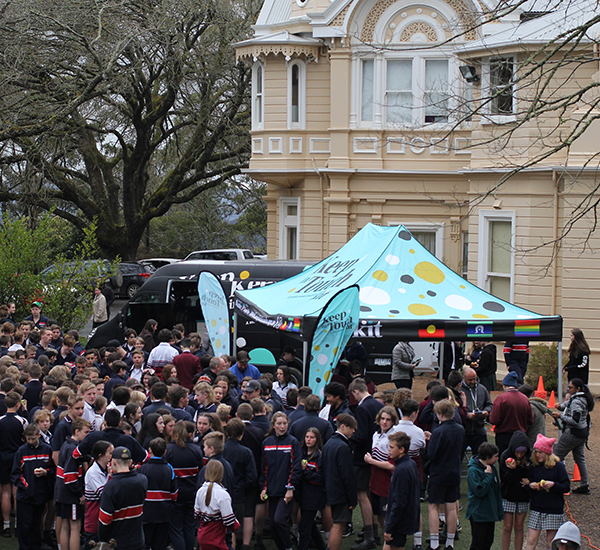 A crowd of year 8 students gather in front of KIT Van at Braemar College during recess.

A year later, that is now a reality when the Keep In Touch (KIT) roving service was launched at Live4Life day at Braemar College on 9 November.

The KIT app and van are accessible to all young people – they are free and the kit van can be requested to go anywhere in the Loddon Campaspe region. KIT can also connect young people to local mental health and wellbeing services, resources and activities.

Anglicare Victoria employs the kit project worker and manages the project funding on behalf of the KIT Steering Committee.

By using the app or the KIT website, young people can request the van to travel anywhere in the region. KIT will also appear at local events and youth focussed gatherings to continue smashing the stigma against frank discussions about mental health in the community.

The van comes with a youth worker, mental health resources, tea and coffee facilities, and a marquee (complete with a giant Jenga set), that give young people a spot to connect, play, and relax.

And in a region with no regional centre, it is important that young people can keep in touch with the broader community and that services can reach them.

Sebastian Antoine, who grew up in the region and was part of running the youth co-design process, said that “[KIT] is about keeping you connected with your community and with services. Young people all wanted somewhere to go, but it didn’t make sense for it to be in one place.”

Sebastian, to an enthusiastic audience, added, “We made the government pay for it, because obviously we [young people] deserve it.”

Find out more and the download the KIT app from KIT’s website, and the When Life Sucks report can be read in its entirety here.