We've prepared this handy info in collaboration with The Centre for Excellence in Child and Family Welfare to lay out the facts in the the youth justice conversation. Download and print out the infographic factsheet for reference too. 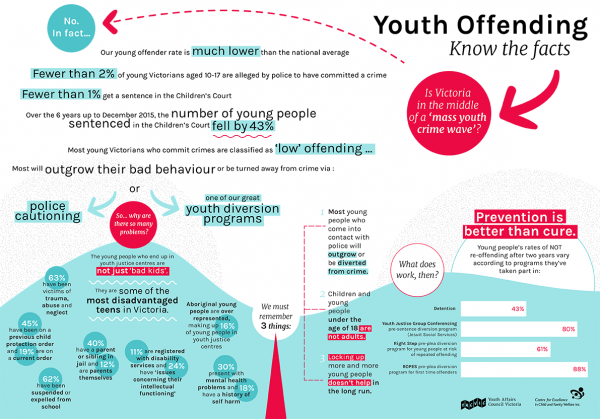 Is Victoria in the middle of a ‘mass youth crime wave’?

Why are there so many problems, then?

Small numbers of young people are offending more often and more seriously. Almost a quarter of all youth crimes are committed by a tiny group of repeat offenders – perhaps no more than 182 young people in the whole state. Many young people who commit the worst crimes come from this ‘high risk’ group.

Meanwhile, youth justice centres are under strain, due to staff shortages, damaged infrastructure, large remand numbers, and the high needs of the young people. Young people have often been kept in ‘lockdown’ in their cells, sometimes for 23 hours a day, because there’s no capacity to let them out. It’s a scary, frustrating time for staff and young people, and it’s been hard for them to form good relationships.

The young people who end up in youth justice centres are not just ‘bad kids’. They are some of the most disadvantaged teens in Victoria.

Long periods spent on remand are associated with worse behaviour – and around half the young people in youth justice centres are there on remand. (Most of them don’t end up getting a custodial sentence at trial, often because they’ve served so much time already.) These young people don’t get enough professional support, and they don’t know what their future holds. They can be unsettled, anxious, bored or angry.

Don’t we need to send a stronger message to young offenders?

We need smarter responses to youth crime, ways of intervening earlier and more intensively to stop offending behaviours before they can get worse.

We must remember three things:

Most young people who come into contact with police will outgrow or be diverted from crime.

They should be taught to understand the impacts of their harmful behaviour and make amends. But if we draw them deeper into the criminal justice system, we risk encouraging further offending.Children and young people under the age of 18 are not adults.

That’s why they’re not allowed to do ‘grown up’ things like drinking, driving on a full license, voting or living independently. At a young age, it’s not always easy to make sensible choices, control your impulses, resist peer pressure, and weigh up risk and reward. And these things are much harder for young people affected by trauma, family violence, drug use, mental illness or intellectual disability. Young people need guidance to build ‘mature’ qualities like empathy, anger management, future planning, and care and respect for others.

Locking up more and more young people doesn’t help in the long run.

A small number of young people behave in such dangerous ways that it’s not safe for them to live in the community until their issues are dealt with. But the current prison system is not very good at rehabilitating people. Around three-quarters of young Victorians who get a custodial sentence are back in custody again within six years. The Australian Institute of Criminology has stated:

"It is accepted … that prisons are 'universities of crime' that enable offenders to learn more and better offending strategies and skills, and to create and maintain criminal networks. This may be particularly the case for juveniles, who, due to their immaturity, are especially susceptible to being influenced by their peers."

We know what works

Prevention is better than cure. We need a long-term, overarching strategy to improve outcomes for Victoria’s most vulnerable young people. This should be accompanied by resourcing in key areas, including better supports for young people in out-of-home care, preventing exclusion of students from school, providing high quality early childhood services for vulnerable families, and funding more youth workers in disadvantaged communities.

In the mean time, we need to direct young people away from crime as early as possible, by enshrining youth diversion in legislation and providing long-term resourcing for initiatives like the Youth Diversion Pilot Program.

Evidence-based diversion programs show higher success rates than imprisonment. According to Smart Justice for Young People, young people’s rates of NOT re-offending after two years vary according to the programs they’ve taken part in, as follows:

Some great work is already being done – for example, the YMCA’s Bridge project for young people who’ve been convicted of an offence cuts the re-offending rates of its participants down to just 3%. But much broader, state-wide work is needed.

Want to find out more?

Here are some great places to start:

Commission for Children and Young People

Australian Institute of Health and Welfare

New research on youth justice centres around the world