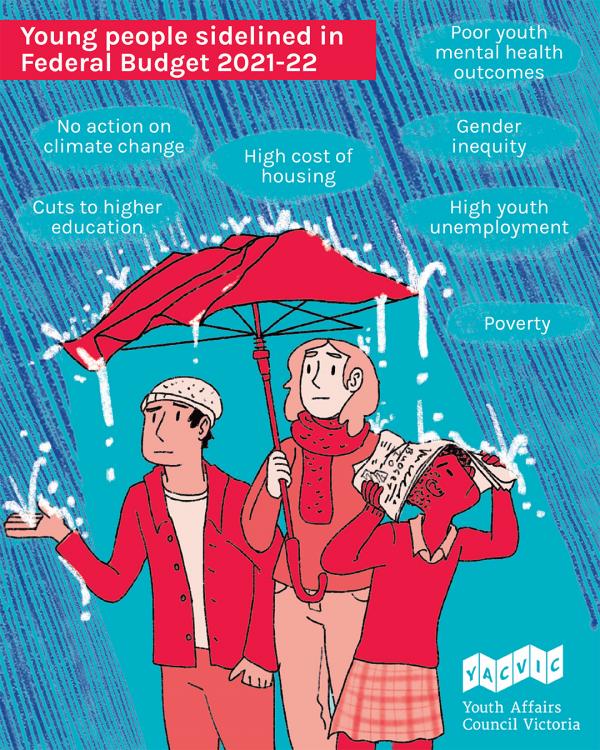 Young people were forced to sacrifice so much of their lives for the broader community during COVID-19. Young people were the first to lose their jobs, their education and other crucial rites of passage were disrupted or missed altogether. For many, goals and ambitions were dashed by this generation-defining pandemic.

Yet, beyond a few short-term announcements on youth employment and skills, young people have been left out of the 2021-22 Federal Budget and the ongoing recovery from COVID-19. Read our full media release here.

The ongoing COVID-19 pandemic will disproportionately impact and scar young people’s lives for years to come. This Budget fails to recognise the important sacrifices of young Australians, and largely leaves young people out of the COVID-19 recovery and future prosperity.

The Budget noted that employment was going up after COVID-19 put thousands of people out of work. Currently the unemployment rate is 5.8 per cent in Australia, however this figure does not capture people who have stopped looking for work or have returned to full time study. The youth unemployment rate remains high at 11.8 per cent. To support people into employment, the federal government has announced:

This Budget provides some support to unemployed and underemployed young people, but still leaves many young people behind. Increases to income support payments are welcome, but the government has chosen to push people below the poverty line by only increasing the amount by $50 a week. Funding for vocational training and apprenticeships will provide much-needed support to some young people. Overhauling the broken employment services system are long overdue and YACVic welcomes the government’s commitment to improving support to people looking for work.

The Federal Budget outlines the government’s commitment to ‘supporting construction jobs and home ownership’. This includes specific grants and loan guarantees each with strict eligibility criteria. The government has committed to:

The Budget will help some first home buyers access a housing market that is spiralling out of control. While these initiatives are welcome band-aid solutions that will get some buyers into the market, increasing competition through these initiatives will likely increase prices, pushing homes further out of reach for many more young people ineligible for these grants. The measures do nothing for young people in the private rental market and the government has ignored calls for investment into social housing and better regulation of the housing market.

This federal Budget has a strong focus on women, in a context where the pandemic has disproportionately affected women and ongoing criticisms of the government’s own gender issues. This Budget has made commitments to:

These announcements are a positive start, but the government remains focused on issues that are not always a top priority for young women. There are no new initiatives or services to address violence and safety and while support for people experiencing family violence is welcome, there is no consideration of young people’s experiences and needs in this context. YACVic urges the government to invest more in gender equity initiatives and targeted support for all young people who experience gender-based discrimination and violence, including trans and non-binary people.

The government is pushing ahead with trials of independent assessments despite strong criticism from the disability sector. They argue that restricting and standardising access to the NDIS is necessary to the long-term sustainability of the scheme as the cost of the NDIS is now forecast to be $32.7 billion by 2023-2024 in line with original estimates from the Productivity Commission in 2017. In this Budget, the government has increased its commitment to the NDIS by $13.2 billion over the next three years to meet demand.

Australia’s universities are under pressure because of a lack of fee-paying international students and their exclusion from JobKeeper last year. Many young people are turning to higher education after losing their jobs in industries hard hit by COVID-19. This Budget provides:

No specific funding will be provided to universities through this Budget which, along with the Job Ready Graduates bill which overhauled course fees, will likely reduce the number of university places for young people. After a joint, nationwide campaign, Youth Work has been included in the list of courses with reduced fees along with Social Work, meaning people studying Youth Work at the Bachelor level will pay $ 7,950 per year instead of up to $14,500 per year as originally planned by the government.

YACVic is disappointed to see the government’s focus on and investment in the gas industry, instead of renewable energy and climate action. Young people have been calling on the government to act on climate change and invest in a just transition from fossil fuels, yet their voices have been ignored in this Budget. The government has committed to continuing to subsidise coal, oil and gas, as well as providing nearly $40 million to small mining companies to explore and dig new mines.

Certain industries have been disproportionately affected by COVID-19 and many of those industries employed a high proportion of young people. With the end of JobKeeper and the Coronavirus supplement to income support payments, many young people will struggle. The government has committed to spending $2.1 billion on targeted supports for aviation, tourism, the arts and international education providers which will provide much-needed support to workers in those industries. This includes:

The Budget makes some welcome commitments to rural and regional Australia, although provides limited support directly to young people. The Budget has not addressed the lack of farm workers and has missed the opportunity to make agricultural work a viable option for young people by providing accommodation, transport and mandating minimum wages. In rural and regional Australia, the Budget will provide:

This summary was written by Sebastian Antoine, YACVic Policy and Research Officer. If you have any questions or concerns, please email policy@yacvic.org.au.